[TO READ A SHORT AUTOBIOGRAPHICAL ESSAY, SCROLL DOWN TO BELOW THE PORTRAIT.]

Matteo Luccio, a contributing editor for GPS World and a regular contributing writer to xyHt, has 25 years of experience as a magazine writer and editor. He has a master’s degree in political science from MIT and he co−founded the public policy magazine Oregon’s Future, which he edited for four years. For the past 20 years, he has edited and written articles for technical magazines on geospatial technologies, as managing editor of GPS World and Galileo’s World, editor and publisher of GPS User Magazine, editor of Earth Observation Magazine, editor of the on−line weekly GIS Monitor (from February 2005 to December 2007), columnist for Professional Surveyor Magazine, contributing writer for Apogeo Spatial and for xyHt, and special correspondent for Sensors and Systems. He has also written for ArcNews, ArcWatch, GeoWorld, GIM International and GEO Informatics and several other publications.

Prior to becoming a journalist, Matteo was a research analyst on public policy issues for a private think tank and for state and local government agencies. His varied career has included employment as a case worker for homeless families, as a sailing instructor, and as an Italian teacher. 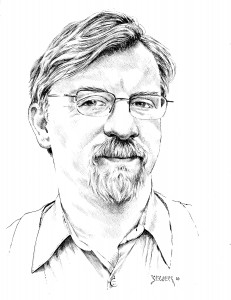 [The following is a short autobiographical essay first published in 2010 February.]

Writing is my trade and one of my several passions. Yet, for many years, I dismissed it as a career. Instead, I earned degrees in political science and worked as a research analyst — first for an independent think tank, then for state and local government agencies. I also spent two years as a full-time political activist, two years assisting homeless families, and various stretches as an Italian teacher, a sailing instructor, a taxi driver, a property manager, a computer consultant, a waiter, and a handyman.

On a date with the daughter of a famous New York Times reporter and bureau chief, 25 years ago, when I was a graduate student at MIT and she a Harvard undergraduate, I remarked that I had considered applying to the joint program between Columbia University’s school of journalism and its political science department, but had decided instead that I wanted to study political science and that I could “pick up” journalism on my own. I implied that political science was a substantive field of study, while journalism was a “mere” trade. It turned out to be a terrible gaffe, as her father, she pointed out, was a graduate of precisely that program… Oops!

In the end, however, I did learn the writing trade on my own. It was the fourth intertwined strand of my current career — after navigation, public policy, and number crunching.

I first became interested in maps as a child — after twice getting lost. The first time, I was five years old and lost track of my mother as she entered a store in Berkeley and I kept walking down the street. The next time I was seven and had insisted on walking home alone from school in Milan, Italy. I was determined not to let it happen again.

So, when I was eleven and my family moved to Pisa, I was the only kid I knew who walked around — from school, to fencing practice, to my bus stop — studying a map and a compass. Next came the topo maps I used for hiking. In my twenties, as I began to sail around the Boston Harbor islands and off the coast of Maine, I learned to use nautical charts, sextants, radio direction-finders, sonar, radar, Loran C, and, finally, GPS (Global Positioning System) receivers. I read my first technical article on GPS in 1985, when I was a graduate student in international security and the United States was building the system. I studied its technical specifications and dreamt about its many possible future applications.

I first became strongly interested in politics as I was growing up, in Italy. In college, in the United States, I majored in political science and was active in various campus organizations. After college, I was a full-time political activist. When I was 22, I started a Ph.D. in political science at MIT, but soon got bogged down and bailed out with a master’s degree. Later, my passion for politics took various forms, including years on the boards of civic organizations and running a public policy magazine.

In grad school, one of my favorite courses was systems analysis (also known as operations research), which encompasses the application of analytic methods to the solution of varied and complex strategic, operational, and managerial issues. I also studied multivariate regression analysis and other statistical methods. In later years, I had the opportunity to apply those techniques as a defense analyst at the Institute for Defense & Disarmament Studies, in Cambridge, and, to a lesser degree, as a research analyst for the State of Oregon and a county agency. I also became an expert user of databases: whether extracting data from legacy mainframe systems, querying SQL servers, or using Microsoft Access or Excel on a PC, I became a wizard at extracting, importing, exporting, translating, concatenating, validating, and analyzing data.

I finally began my magazine career 15 years ago, shortly after re-locating from Boston to Portland, Oregon, as the co-founder of the public policy magazine Oregon’s Future, which I edited for four years on top of my day job. I edited and commissioned articles, chaired the editorial board, coordinated dozens of volunteer writers, editors, and graphic artists, and wrote editorials and a few articles.

I solicited informed opinions from people with a wide variety of backgrounds and perspectives. I summarized my editorial philosophy into the following mission statement: “to publish opinions — argued logically, supported by facts, defended with passion, and tempered by tolerance.” In the process, I learned, the hard way, about magazine writing, editing, production, and circulation.

In the fall of 2000, my longstanding passion for navigation, my interest in science and technology policy, and my self-taught knowledge of magazine writing and editing, came together, as I became the managing editor of GPS World and of Galileo’s World. Two and a half years later, I launched my own publication, GPS User Magazine, as editor and publisher. Two years after that, I took a job as editor of Earth Observation Magazine (a monthly, which I helped transition from print to on-line publication) and GIS Monitor, an on-line weekly.

One of my best moments as a magazine editor came in my first week as editor of EOM. I was taking over a magazine that had only a handful of articles in the pipeline. I needed good content, fast. I remembered reading that NASA, in addition to its well-known space exploration programs, also had twelve space-based Earth observation programs — focused on such subjects as agriculture, health, and security. So, I called NASA and negotiated a deal for 12 articles: each month, the top scientists in two of the programs would describe their mission, methods, and achievements. In the first week, I had secured the core content for the next six issues of the magazine! (To complete each issue, I wrote an article, commissioned three, and wrote a news section and an editorial.) Unfortunately, those were the only six issues of EOM I edited, because then the publisher shut it down for business reasons.

Meanwhile, as the editor of GISM, I was the captain of my own ship… and did all the rowing, too! I researched and wrote 139 issues, most of which consisted of two articles, plus a summary of two dozen press releases. I profiled companies, projects, products, and people, reported on conferences, interviewed geospatial managers, engineers, and technicians, and reviewed books. It was a good run, for nearly three years, with about 25,000 subscribers, until the publisher, unable to make the publication profitable, shut it down at the end of 2007. Two weeks later, I launched my new company, Pale Blue Dot, LLC.

Braid these disparate strands together and what do you get? A techie sailor, a data-driven policy analyst, an eclectic aficionado of all things geospatial, a researcher driven by deep interests and intellectual curiosity, a writer adept at reaching diverse audiences, and a meticulous editor. At your service.